An all-European survey of platform work shows that more and more people are getting their income from gig economy. In Estonia, 8% of working age population do platform work every week, which is more than in Germany and Sweden, but less than in Italy and the Netherlands.

The spread of digital platforms has facilitated the emergence of new forms of employment, and although the traditional form of working, or a full-time job under employment contract at one employer, prevails in Estonia, the importance of platform work is steadily growing.

“Platform work is the type of work managed via a digital platform and carried out in a virtual or physical environment. Online platforms for work mediation have spread quickly in Estonia – ride sharing and delivery services have firmly planted themselves here; however, work is also mediated via platforms in translation and design services, childcare and household work,” Johanna Vallistu, Expert at the Foresight Centre and Project Manager of the studies on the future of labour market, said.

For the people of Estonia, platform work is generally not their main work. 8% of the respondents worked via a platform at least once a week. Altogether 20% of working age population has undertaken platform work at one time or another. The best-known platforms in Estonia are Bolt, Uber, Wolt, and GoWorkaBit.

The results of the international survey indicate that platform work is most frequent in Central and East European countries and in South Europe. Estonia ranks the fifth by the spread of platform work among the 13 countries surveyed. “The spread of platform work means that workers’ level of social protection may be uneven, and that people increasingly take their own risks in relation to their working time, income and working conditions. It often also means a significant increase in working hours,” Vallistu pointed out.

The assumption that platform work would significantly replace traditional employment has not been confirmed. About a half, or 49% of Estonian platform workers said that they had a full-time main job, while 7% work part time, 9% of platform workers in Estonia are self-employed, 3% are retired and 15% are students.

“Instead, it appears that platform work is a source of additional income besides the main job, or just a hobby activity. At the same time, the results of the survey show that a certain group of people work very long hours to cover their financial needs. This has negative impacts on their work and family life balance, and significant work safety risks also emerge,” Vallistu emphasised.

The survey of platform work was conducted at the end of 2018 in cooperation of the Estonian Foresight Centre, the Foundation for European Progressive Studies (FEPS), University of Hertfordshire, the UNI Europa services workers union and the British Ipsos MORI market research company. The survey is a part of an all-European comparison where the spread and nature of platform work was studied in Estonia, the Netherlands, Germany, Sweden, Switzerland, Italy, Finland, Spain, Slovenia, the Czech Republic, France and the United Kingdom. Altogether 2000 people from Estonia between the ages of 18 and 65 participated in the survey.

The results of the Estonian survey can be found in the report of the survey (in English) and the summary of the report (in Estonian), published on the home page of the Foresight Centre. https://www.riigikogu.ee/arenguseire/tooturu-uurimisprojekt/ 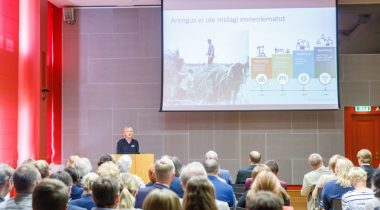