The Foreign Affairs Committee and the National Defence Committee heard a report on developments in US foreign and domestic policy, and on US-Estonia relations. On Saturday, the Presidents of the Baltic states are set to meet the US Vice President Mike Pence at the Munich Security Conference.

The Chairman of the Foreign Affairs Committee Marko Mihkelson said that the main thing in bilateral relations is the continuation of defence projects. “The US contribution in strengthening the NATO eastern flank, and deterring any threats has been instrumental,” said Mihkelson. “We are working towards ensuring a continuing and extended US presence in Estonia.”

He said that the US has increased the presence of its units in Europe. In the framework of the European deterrence strengthening programme, launched by President Barack Obama in 2014, the US has invested USD 75 million into Estonia; 25 million of this went to Ämari Air Base, 17 million to Tapa military base, and 33 million to developing anti-tank weaponry.

Mihkelson said that although the new US administration has yet to confirm, and it is still early days to talk about the fundamental questions, it is evident that the US will focus on anti-terrorism activities in the near future.

At the same time, the US is forcefully insisting that the NATO allies equalise their military spending. The US Secretary of Defence James Mattis said yesterday that although allied relations are extremely important for Washington, USA may reduce their contributions if the Member States fail to increase theirs. Today only five countries out of the 28 fulfil their two percent requirement: USA, UK, Poland, Greece, and Estonia.

Member of the National Defence Committee Madis Milling noted that the Central European countries are defended in Estonia, Latvia, Lithuania, and Poland. “If the Netherlands or France find it hard to increase their defence expenditure, they might find it easier to help us acquire medium-range air defence systems, for example,” he proposed.

The overview of the foreign and domestic policy of the US, and the US-Estonian bilateral relations was provided by the Estonian Ambassador to the United States H.E. Mr Eerik Marmei, Foreign Policy Adviser to the President Ms Kyllike Sillaste-Elling, and Director of the Security Policy and Transatlantic Relations at the Political Department of the Estonian Ministry of Foreign Affairs Ms Mariin Ratnik. 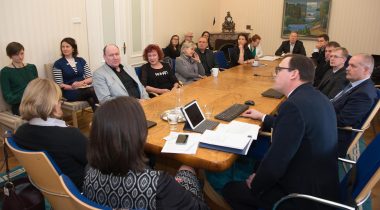