At its today’s sitting, the National Defence Committee of the Riigikogu (Parliament of Estonia) unanimously decided to support Martin Herem as the candidate for the Commander of the Estonian Defence Forces.

Chairman of the Committee Hannes Hanso said that Herem was the best candidate for this important position. “Herem is a highly competent and very upright officer who has passed all ranks in the Estonian Defence Forces, from a junior officer to a Brigadier General,” Hanso added. “I would entrust him with the position of the Commander of the Defence Forces.”

Member of the National Defence Committee Ants Laaneots believes Herem is a steadfast and patient person who thinks first and then acts. He recalled the achievements of Herem as the Commander of the North-Eastern Defence Command, where he built up the organisation and integrated the activities of the Defence Forces and the Defence League.

Minister of Defence Jüri Luik introduced the candidacy of Herem to the National Defence Committee, saying that the candidate had top-level leadership qualities and thorough professional competence. According to Luik, Herem is a competent officer who is capable of seeing the wider picture, and who has also worked as a lecturer. 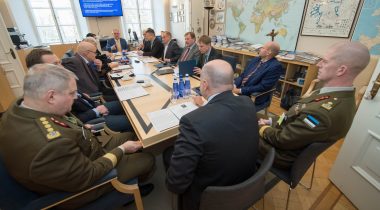