At its today’s sitting, the National Defence Committee of the Riigikogu (Parliament of Estonia) discussed the impact of the illegal migration pressure originating from Belarus on Lithuania and Latvia, and found that Estonia should learn from the experience of its neighbours and increase its preparedness for preventing possible illegal immigration.

Chairman of the Committee Enn Eesmaa said that Estonia had helped Lithuania from the beginning of the migration pressure by sending both equipment and people. Estonia has contributed altogether more than 900,000 euro.

In the opinion of the Deputy Chairman of the Committee Leo Kunnas, Estonia had to make preparations so that the situation of Lithuania would not be repeated here. “The situation has changed a lot, and at present our existing plan, according to which the construction of the South-Eastern border had to be completed by 2026, is no longer appropriate,” Kunnas underlined. “Estonia has to change its current plan. It is also necessary to establish a crisis reserve, because we may need that one day.”

Minister of the Interior Kristian Jaani, who gave explanations at the sitting, assured the National Defence Committee that the works for fortifying the external border of Estonia were continued actively. Currently, active preparation and construction works are simultaneously conducted on a nearly 60 km long section of the external border. He added that if necessary, it was possible to build temporary obstacles in cooperation with the Defence Forces.

Jaani also remarked that in the current situation, not only the migration pressure from Belarus on Latvia and Lithuania was under discussion, but also Poland was facing increasing challenges. “Today, it is the duty of the Baltic states and Poland to fortify the Belarusian border and to return the people who have illegally entered these countries to their homeland,” Jaani said.

Undersecretary for Defence Readiness of the Ministry of Defence Meelis Oidsalu also replied to the questions of the members of the National Defence Committee. 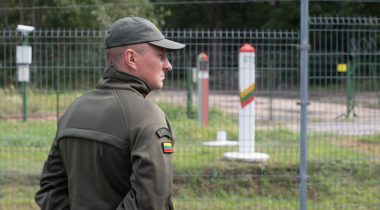