President of the Riigikogu (Parliament of Estonia) Eiki Nestor said in his speech at the opening of the 34th Session of the Baltic Assembly in Vilnius that Baltic cooperation is important and in today's situation, which is very complicated for Europe, the need for effective cooperation is greater than ever before.

“The success of each Baltic state is an essential part of the success story of all three countries,” Eiki Nestor said, and added that three Baltic States are very closely connected with each other – the worries of one are the worries of all, the success of one inspires others, the failure casts a shadow on all.

“When we are all together, the three of us, we are more than three times stronger,” the President of the Riigikogu noted. “We know from our history that the absence of unity in the 1930s resulted in the destruction of our statehood. On the other hand, joint actions in the end of the 1980s and the beginning of the 1990s brought us success in restoring this statehood.”

In Nestor’s opinion, Baltic cooperation is important and it must continue. “I can assure you that, at the level of the speakers of parliaments, this cooperation works one hundred percent. No matter where we are, we essentially conduct one and the same Baltic business in the interests of all three of us,” he said. “We need a working cooperation even more than before also in today’s situation which is very complicated and unfortunately also tragic for Europe.”

Nestor said that the Baltic Assembly should essentially become more efficient, and more visible to its citizens. “One possibility for that is transition to closer communication between the parliamentary committees, and it is also necessary to value and coordinate the functioning parliamentary cooperation more than it has been done so far,” President of the Riigikogu said.

“In Estonia we have decided that representing the Riigikogu in the Baltic Assembly will give the best result if we proceed from the principle of representation of parliamentary committees,” Nestor said. “Parliamentary committees can themselves decide which cooperation issues are important to them, and also on the need for and frequency of their meetings.”

At today’s Session, the Resolution of the BA will be passed and the Final Document will be signed. The presidency of the Baltic Assembly and the Baltic Council of Ministers will pass over to Latvia.

The Baltic Assembly is an international organisation that promotes cooperation between the parliaments of Estonia, Latvia and Lithuania. It was founded on 8 November 1991 in Tallinn. Next year the BA will celebrate its 25th anniversary. 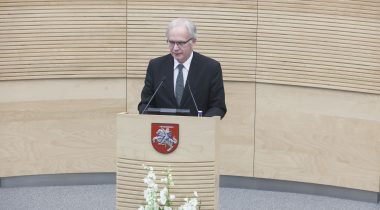