The President of the Riigikogu Eiki Nestor spoke at the June deportation memorial ceremony, emphasising the cruelty of the deportations carried out by the Soviet authorities, and calling for the injustice to be commemorated.

“Allow me to remind you that before the world war devastated Europe, countries around the world had failed to agree on their future. Stalin and Hitler, however, found each other,” Eiki Nestor said. “Two leaders of inhumane regimes divided up a part of Europe. All the three Baltic states lost their independence.”

Nestor said that a dictator bases his power on fear and on creating the concept of an enemy. In order to force their power on the people, the USSR Soviet of People’s Commissars and the Communist Party adopted a document on the deportation of the socially alien element.

“Moscow was convinced that the socially alien element of Estonia consisted of 11,102 individuals. Nearly 4,000 of them were minors, including over one hundred children under one year of age. There were also bedridden elderly people,” Nestor said. “Can there be anything more unjust than punishing the innocent? Can there be anything crueller than treating defenceless children and elderly as enemies? We bow to you, dear compatriots, and will remember you forever.”

During the night before 14 June 1941, the Soviet occupation authorities carried out a mass deportation in Estonia, taking an estimated 10,000 people to Siberia. 6,000 children, women and men died of hunger and exhaustion, or were executed. 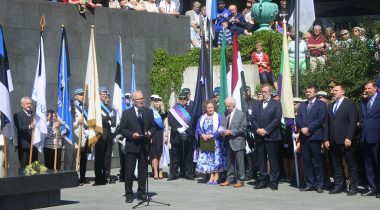