President of the Riigikogu (Parliament of Estonia) Eiki Nestor said at the meeting with President of Ukraine Petro Poroshenko that Estonia hoped that Ukraine would be successful, and assured that the sanctions against Russia would continue as long as the Kremlin did not fulfil the Minsk agreements.

“We hope we will one day see a successful Ukraine. The way there is complicated, but if the people of Ukraine want it and the politicians of Ukraine stick to the reform policy, it can be achieved,” the President of the Riigikogu said.

He urged the Riigikogu of Estonia and the Verkhovna Rada of Ukraine to cooperate closely in enhancing of parliamentarianism and democratic processes and continuing the reforms to modernise the economy and promote the rule of law.

At the meeting, Nestor assured the President of Ukraine that first Russia would have to fulfil the Minsk agreements, and only then the easing or abolishing of sanctions against Russia could be discussed.

“Estonia is among those countries who consider it important to give continuous and extensive support to Ukraine that keeps itself on the democratic course of reforms. One part of it will be to end Russia’s hostile activities in East Ukraine and to fulfil the Minsk agreements,” the President of the Riigikogu said. Before this, it is not possible to start discussing the abolishing or easing of sanctions against Russia. Ukraine must have the possibility to restore control over its territory.”

Nestor remarked that the European Union had demonstrated impressive unity in its response to the violation of the international law by Russia. 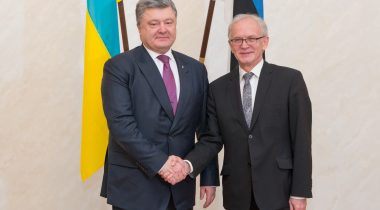