Christmas is over. Church bells have rung in the year 2021.

The last year – 2020 – was difficult and unlike any we have seen before.

On 2 February, we celebrated the centenary of the Tartu Peace Treaty, with which Russia recognised the independence and inviolability of Estonia for all eternity. The border between Estonia and Russia was marked down at the time, and under international law it is still there today.

We celebrated the centenary of Estonia’s Constitution – the foundation of our democracy. Estonia is a free and democratic country with guaranteed freedom of speech, thought, and conscience. This is how it must remain.

We have been very active in foreign policy. As a non-permanent member of the UN Security Council we have stood firm in our support of the rights of the people of Belarus, and supported Ukraine in its efforts to put a stop to the aggression directed against it. Our other activities have also shown that we deserved the membership. Our relations and cooperation with our allies both within NATO as well as in other international organisations has been excellent.

In Estonia, we have fought for the wellbeing of our own people and businesses. Reducing the excise duty on electricity, gas, and fuel increased the purchase power of the people and stimulated the economy. Pensions and benefits grew and the number of people living in deprivation dropped. Research funding reached one percent of the GDP, and we brought Estonian ships back under the Estonian flag. In the ranking of the wealthiest countries, we rose from the 38th place to 33rd. We are on the right path.

However, an unforeseen pandemic changed the way of life in Estonia and all around the world. The steps taken by the Government and the Riigikogu to protect the people as well as economy and our businesses have justified themselves. People were given more space to breathe in Estonia, because we understand that freedom comes with responsibility.

New heroes rose to the forefront – staff of medical and care facilities, shop assistants and customer service specialists, volunteers, and many other hard-working and brave people. We must also applaud the entrepreneurs who found new and smart solutions for continuing their activities.

As a country and a nation, we have looked for solutions to the corona crisis and I would go so far as to say that we have fared better than most countries. The economic downturn and unemployment caused by the crisis have luckily remained much smaller than was originally feared. The Bank of Estonia predicts a rapid economic recovery for this year, if we defeat corona.

Sadly, too many people did lose their jobs because of corona, and need support to cope. But some lost even more – their life. My heartfelt condolences go out to those who lost their loved ones because of this disease.

We will do our best for it to be better than last year. This year, we will have a referendum on marriage, as well as presidential and local government elections.

With this referendum, we will put a stop to the imported value conflict and the wedge being driven into our society, which for a large part of our society started very painfully in 2014 when the Registered Partnership Act was forced on them. Marriage is a union between a man and a woman and needs to be protected by the Constitution. It would make it impossible to redefine it by the parliament or the courts, or influenced by external pressure, without asking the people first. My answer is a resounding YES!

Unlike Finland and Latvia, we do not have direct presidential elections. I believe that this will change in the future and that the people will be given more opportunities to decide on important issues in our country. At the local government elections, we can all have our say for the better future of our local communities.

I hope that the new year brings less political turbulence and conflict. We need to listen to each other more attentively and hold on to those values in particular that have carried our nation throughout the times, ensured our survival, and brought us where we are.

We are faced with new tasks and new challenges.

I wish you all the strength you need for your work, I hope you will have a spark in your eye and joy in your heart.

And of course, I wish you a Happy New Year. 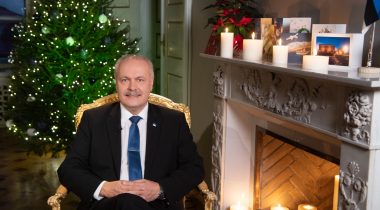