Perusing the Riigikogu verbatim records from over one hundred years ago, we come across the nice tradition of reading aloud the cablegrams with greetings that had been sent to the parliament.

“I wish you all the strength as you start your new work. May our home grow strong and the pillars at its gate solid.”

This greeting was sent to the Members of the Riigikogu by lieutenant Schmidt in early 1921 from Lithuania. That military representative of the Republic of Estonia later Estonicised his name to August Johannes Torma and became a distinguished diplomat. There is nothing antiquated about the core of his wish even today, which makes it very fitting to be conveyed to the Estonian people on the first day of 2022.

I hope that Christmas and New Year passed in joy and security for all of you. I am sure that many of you had the chance to spend the holidays with your families and close ones, or peacefully alone. Meanwhile, there were others who because of their jobs or their own free will upheld the sense of security and holiday cheer of every one of us. They did it in rescue commandos, police force, health care institutions, businesses, production facilities, associations, authorities, shops, media, foreign missions, or other roles. I take my hat off in gratitude to all of you and hope that there was enough peace of mind and holiday spirit to reach you as well.

My hope for the new year is that we would be able to support one another better. Those who share our beliefs but also those who challenge us in finding a common ground. The big should support the small, and the small should support the big – both in the direct and the metaphorical sense. In politics and daily lives. Across the nation and in local governments. Face to face, in public space, and online. Estonia’s success and happiness are best measured by those among us who have the least.

Reminding ourselves that one in ten Estonians live abroad for any number of reasons, one in five still live on the threshold of poverty, many are suffering from mental or physical abuse, too many have been subjected to an unfair treatment through no fault of their own, and that the Estonian population numbers still keep declining… If we want Estonia to be a good home for us all and for lieutenant Schmidt’s cablegram to ring true for centuries, what we most need are human relations and care for one another.

We also need to be smart and keep our sight on our future, so that we would always be able to overcome the crises and stumbling blocks on our path.

Although our security might continue to be sound, the security environment is more strained than during the last New Year. Even though economy is developing, many among us have become less certain of coping over the last year. We are a single nation and society but too many among us feel rejected. The health crisis has remained a sad fact and hundreds of people still had to spend these holidays in hospitals or in sick beds. The number of fatalities among us has been tragically high.

Nearly a century and a half before we started receiving professional health care advice from the Scientific Advisory Board, our celebrated poet Friedrich Reinhold Kreutzwald, who was after all also Võru city doctor, put together a health care manual for Estonian homes. In the foreword to this book from 1879, this figurehead of national enlightenment wrote:

This is why I wish that we would all be fully committed to learning life’s lessons in the new year, taking note of concerns, recognising red flags, and getting everything under control more easily and early. All this to make the new year and the future centuries enjoyable for all of us and for the entire Estonia.

All the success to Estonia!

The President of the Estonian Parliament 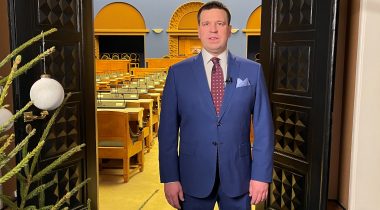