The discussion at the meeting of the Presidents of Parliaments focused on mapping the possibilities for future cooperation between Estonia and Montenegro, on allied relations in NATO and Estonia’s support to Montenegro in the accession process with the European Union. “During the years after gaining independence, Montenegro has built up a well-functioning society and achieved international trust,” Ratas said. “Estonia, who was first country to establish diplomatic relations with Montenegro and ratified the association agreement, supports Montenegro’s aspirations to become a member of the European Union.”

Besides the opportunities for bilateral cooperation in digital and cyber sectors, exchanging of experience in the education sector and strengthening the communication between parliamentary committees were spoken about as well.

The President of the Riigikogu acknowledged Montenegro’s contribution to the work of the Cooperative Cyber Centre of Excellence and its participation in the Enhanced Forward Presence of the NATO allies in Latvia.

The President of the Riigikogu is accompanied on the visit by members of the Riigikogu Sven Sester and Kalvi Kõva. The Estonian delegation also met with Prime Minister of Montenegro Zdravko Krivokapić, with whom the situation in West Balkan was discussed. 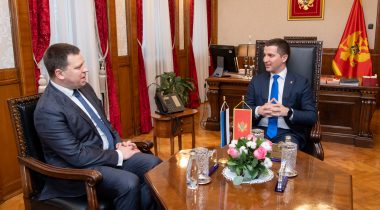