President of the Riigikogu (Parliament of Estonia) Jüri Ratas attends the hybrid conference of the Speakers of the Nordic and Baltic (NB8) parliaments in Copenhagen. The discussions will focus on the hybrid attacks against European countries launched by the Belarusian regime and illegal immigration, and on future cooperation between the Baltic States and the Nordic Countries.

At the traditional meeting of the Nordic and Baltic Speakers, all participants first give an overview of significant topical issues in their parliaments. The Speaker of the Danish parliament will speak about the organisation of work between the parliament and the government.

The Speakers of the parliaments of Latvia and Finland will give a survey of involving citizens in the work of the parliament. Estonia has made a proposal to enhance the cooperation between the standing committees in order to achieve tangible results, like launching the debate of Social Affairs Committees for mutual recognition of digital prescriptions.

The Nordic-Baltic cooperation, or NB8, has been bringing Finland, Sweden, Norway, Iceland, Denmark, Estonia, Latvia, and Lithuania around the same table since 1992. The first meeting of the NB8 Speakers took place in 1997 in Karlskrona, Sweden. 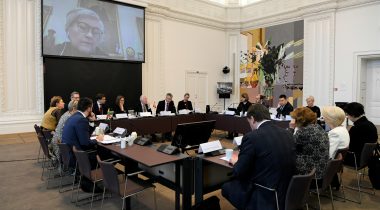