Today, President of the Riigikogu (Parliament of Estonia) Henn Põlluaas met with Speaker of the National Assembly of the Republic of Korea Moon Hee-sang and the delegation accompanying him.

At the beginning of the meeting, Põlluaas expressed his condolences to his colleague on the boat disaster in Hungary, in which citizens of South Korea lost their lives.

The meeting focused on the excellent relations and further cooperation between the two countries. “The cooperation between Estonia and the Republic of Korea is very good, and mutual interest is increasing,” Põlluaas said. In his opinion, there is potential for even closer cooperation at the level of the governments and the businesses. Põlluaas expressed hope that South Korea would be ready to open its market to Estonian food products. He added that there were several fields of activity where the two countries could be useful to one another.

Moon Hee-sang confirmed South Korea’s strong support to Estonia’s candidacy for non-permanent membership of the UN Security Council. Both parties pointed out mutual interest in developing of research and new technologies. Moon Hee-sang said that Estonia was one of the most powerful digital countries, and an example to others with its e-governance solutions. Põlluaas invited South Korea to share with Estonia its experience in the 5G networks, where they are the global leader.

The colleagues also discussed reduction of tensions on the Korean Peninsula. Põlluaas expressed concern about the North Korean nuclear programme and missile tests, and reaffirmed Estonia’s readiness for full cooperation both in the European Union and in the United Nations to resolve the situation. Moon Hee-sang emphasised that the global community supported South Korea in this issue, and that the country was optimistic about the peace process.

Chair of the Estonia-Republic of Korea Parliamentary Group Urve Tiidus also participated in the meeting. She acknowledged the country’s investments into research and development. In her opinion, South Korea is the world leader in this field, and an example for all. Tiidus also said that she was happy that the Korean tourists had discovered Estonia. She expressed hope that the interest of Koreans in Estonia would grow after today’s visit. 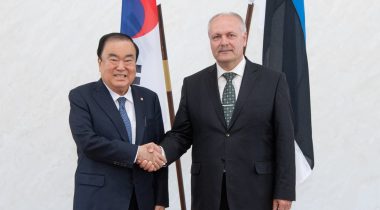