President of the Riigikogu Eiki Nestor is on a visit to Rome today and tomorrow. He will attend an Arvo Pärt concert as part of the celebrations for the centenary of the Republic of Estonia, and will meet with the Speaker of the Italian Senate.

Tonight, Nestor will address admirers of Pärt at the concert in the Basilica of Santa Sabina. The concert will mark the fifth anniversary of Pope Francis as Holy Father.

Tomorrow, he will meet with the Speaker of the Italian senate Maria Elisabetta Casellati to thank Italy for its contribution to the deterrence on NATO’s Eastern Flank, and its participation in Baltic air policing. It was only last week that the Italian air force handed over the air policing responsibilities to France after a four-month mission.

Another topic at the meeting will be the forceful activities of Italy in dealing with the migration crisis. Italy has been involved in a constructive cooperation with Estonia, providing well-rounded assistance in interviewing the refugees waiting for relocation. The two Speakers will also discuss closer bilateral economic ties and cultural cooperation. 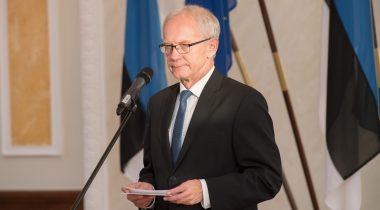