At their meeting today, President of the Riigikogu (Parliament of Estonia) Jüri Ratas and President of the Congress of Deputies of Spain Meritxell Batet Lamaña discussed how societies were overcoming the pandemic, and spoke about the challenges facing the European Union in combating the effects of climate change, and the joint response of the European Union and NATO to Russia’s growing aggression.

“At this moment, the whole Europe, and not only Eastern Europe or Ukraine, is facing a real threat,” Ratas underlined. “The threat is coming from Russia’s attempts to dismantle the European security architecture.” Ratas said that Europe had to stand firm, and for this it needed full coherence with its transatlantic partners, as well as unity and resolve among themselves. “We need to focus on Ukraine and double our efforts to support the country,” Ratas pointed out. “Ukraine is under a military and political pressure and is experiencing severe economic coercion. It is precisely here that the EU can bring concrete deliverables to the table.”

The President of the Riigikogu thanked Spain for their contribution to the security of the Baltic region and invited his Spanish counterpart to visit Estonia.

The Speaker of the Spanish Congress of Deputies said that the parliaments could cooperate more in promoting digital solutions.

Raivo Tamm, Chair of the Estonia-Spain Parliamentary Friendship Group, who accompanies the President of the Riigikogu on the visit, gave an overview of the plans of the group. Member of the Riigikogu Sven Sester emphasised the importance of direct international contacts generally and in particular in the wider spreading of digital solutions.

The discussions at the meeting with Deputy Prime Minister and Minister for the Ecological Transition Teresa Ribera focused on digitalisation and potential cooperation between the two countries, as well as using of Estonia’s experience. The ways to achieve climate neutrality and reach the results that would contribute to the economic development of countries were also discussed.

At the meeting with Chair of the Foreign Affairs Committee of the Congress of Deputies Pau Marí Klose and other MPs from different political groups, the security situation in Europe and the possibilities to help Ukraine and the Eastern partners politically, economically and in the field of defence were spoken about. The speakers emphasised the importance of the unanimity of the European Union in responding to the aggressor.

The Spanish colleagues expressed interest in Estonia’s experience regarding social integration. Both sides acknowledged the excellent cooperation in the missions in Mali and Mozambique as well as within the framework of Frontex.

In the afternoon, the President of the Riigikogu delivered a speech about the digital transition at the IE University in Madrid. He gave an overview of the e-governance services and Estonia’s experience in developing electronic services. 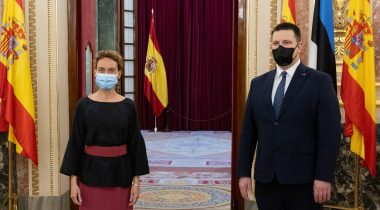