President of the Riigikogu (Parliament of Estonia) Jüri Ratas and Speaker of the Eduskunta (Parliament of Finland) Anu Vehviläinen discussed the possibilities for strengthening the cooperation between Estonia and Finland and the creation of new initiatives at their meeting in Tallinn today.

“The relations between Estonia and Finland remain close and strong, between the people as well as in economy and culture,” Ratas stated. “During the last 30 years, Finland has had an important role in the development of Estonia, for example, in the tourism sector or through direct investments.” He expressed hope that even more possibilities and new initiatives would be offered by the report on Estonia-Finland future cooperation, which would be completed in February 2022.

Ratas said that Estonia and Finland were closely connected by common electricity systems, and they also cooperate in the field of cybersecurity. He pointed out that Finland had an expert at the NATO Cooperative Cyber Defence Centre in Tallinn and Estonia had an expert at the European Centre of Excellence for Countering Hybrid Threats in Helsinki. Both parties consider it important to have even better exchange of information and situational awareness.

Speaking of future connections, Ratas highlighted the connection of Tallinn and Helsinki by Rail Baltica. He proposed to give a new impetus to the cooperation between sister cities and to create relations between sister schools. “In this way, we can strengthen mutual relations and learn to know each other’s language and culture better,” Ratas said. Speaking of digital cooperation, the President of the Riigikogu mentioned the digital prescriptions, which, in his opinion, could also be introduced in other Nordic Countries and Baltic States.

Information and experience in managing the coronavirus crisis were also exchanged at the meeting. Ratas thanked Finland for solidarity and assistance that helped Estonia in fighting the COVID-19 epidemic. Finland lent Estonia 130,000 doses of Pfizer/BioNTech vaccine, which Estonia will return in February next year, and was ready to receive critical patients from Estonian hospitals in case there was a need.

Member of the Estonia-Finland Parliamentary Friendship Group Urve Tiidus, who also participated in the meeting, said that the relations between the two countries were fantastic. In her opinion, we as close neighbours have similar traditions, which contribute to the strengthening of cooperation. She underlined digital cooperation and establishing closer communication between universities as fields of cooperation. 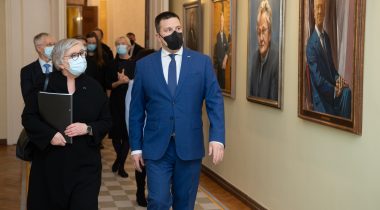