At its extraordinary sitting today, the Constitutional Committee of the Riigikogu (Parliament of Estonia) discussed the proposed amendments to the Draft Resolution of the Riigikogu 288 OE. The Committee adopted a Statement which condemns the motions to amend regarding Estonia becoming a part of Russia and surrendering Saaremaa Island to Latvia.

All motions to amend submitted by the Members of the Riigikogu that concern making Estonia a part of Russia and surrendering the island of Saaremaa to Latvia contradict the oath of office of Member of the Riigikogu and the Good Practice of the members of the Parliament, and damage the international reputation of Estonia.

We call on the members of the Riigikogu who submitted these motions to apologise for them. We condemn such activities on behalf of the Constitutional Committee.”

The Constitutional Committee of the Riigikogu will continue preparations for the second reading of the Draft Resolution of the Riigikogu “Holding a Referendum on the Issue of the Definition of Marriage” at its extraordinary sitting at 12 noon on Sunday, 10 January.

The Bill provides for submitting the following question (other national issue): “Shall marriage remain a union between a man and a woman in Estonia?” to the referendum to be held on 18 April 2021.  By the date for submitting amendments, 9317 motions to amend the Draft Resolution were submitted. 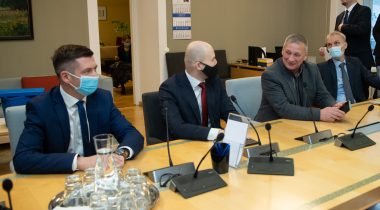