In the opening address to the cooperation conference of the Economic Affairs Committee of the Riigikogu (Parliament of Estonia) and the European Peat and Growing Media Association (EPAGMA), Chairman of the Economic Affairs Committee Toomas Kivimägi said that one of the greatest ideas and challenges of the European Union today is the establishing of the common Energy Union.

“By building up the common Energy Union, we can be sure that none of us will remain in trouble in this sphere, no matter how complicated this challenge may be for one or another country,” Kivimägi said. He added that wider and more flexible taking into use of the diverse resources of the Member States themselves could and should to a great extent reduce the dependence of the Union on energy export.

In his opinion, one of the cornerstones of energy security is the maximal and effective consumption of indigenous energy sources like peat, wind, sun, water or biomass. He also said that besides the oil shale, that is very important for Estonia, the production of shale gas is also a new possibility.

Kivimägi emphasised that energy security cannot be built up at the expense of the environment, and it is also necessary to involve the scientists. The diversity of indigenous energy sources requires flexible approach from the European Union, and local the peculiarities have to be taken into account in establishing environmental requirements.

“Greater and more effective use of indigenous energy resources is in every way justified and reasonable,” Kivimägi said. “But before we become too enthusiastic, we should also recall an ancient piece of wisdom: we have not inherited nature from our parents, we have borrowed it from our children.”

The cooperation conference of the Economic Affairs Committee of the Riigikogu and the European Peat and Growing Media Association (EPAGMA) on the key role of indigenous energy sources for Estonia and other European countries was held at the Conference Hall of the Riigikogu today.

It was noted at the conference that the potential of domestic energy production is underexploited in the European Union at present. In 2012, imported energy formed nearly 53 percent of the energy consumed in the European Union. The rate of energy dependence of Estonia was 11.9% in 2013; with this, we were the least dependent on imported energy among the Member States of the EU. 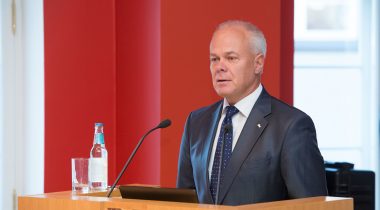