Chairman of the European Union Affairs Committee of the Riigikogu Toomas Vitsut acknowledged Malta for the meaningful and successful Presidency. “Malta put on the agenda the most important issues faced by the European Union in the complicated times of today,” Vitsut said. “As it was not possible to solve all these issues during the six months period, Estonia as the next holder of the Presidency will continue with the topics of single market and migration, but we will also focus on new themes.”

The priorities of Maltese Presidency were migration, single (digital) market, security, social inclusion, neighbourhood policy and maritime sector. Maritime policy of the EU, issues relating to migration and Brexit, and the role of national parliaments in the EU will be discussed at the last interparliamentary meeting of the Maltese Presidency. Toomas Vitsut is one of the speakers in the panel on maritime policy.

Malta has a population of 430,000. The 71-member parliament of Malta organised six Presidency events. Malta’s first Presidency of the Council of the European Union will end on 30 June, and then Estonia will take over. During the Estonian Presidency, the Riigikogu will organise seven conferences, where the representatives of the parliaments of the Member States and the European Parliament will participate. The first of them, the Meeting of the Chairpersons of Parliamentary Committees for Union Affairs of Parliaments of the European Union (COSAC), will be held in Tallinn on 9 and 10 July. It is a preparation for the COSAC Plenary Meeting, held in Tallinn on 26–28 November. 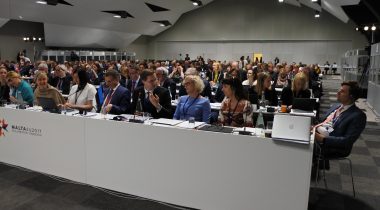