Today, Chairman of the European Union Affairs Committee of the Riigikogu (Parliament of Estonia) Siim Kallas and Chairman of the Foreign Affairs Committee of the Riigikogu Marko Mihkelson met with Deputy Prime Minister for European Integration of North Macedonia Nikola Dimitrov. Their discussion focused on North Macedonia’s possibility to join the European Union.

Kallas and Mihkelson assured at the meeting that Estonia supported the enlargement of the European Union, and definitely also the accession of North Macedonia, Estonia’s good ally in NATO. Mihkelson said it was remarkable that North Macedonia had managed to resolve its name dispute with Greece. The Chairmen of Committees recognised North Macedonia’s efforts in carrying out the reforms.

Possible cooperation in e-governance and the teleworking opportunities used in the Riigikogu were discussed as well.

Photos of the meeting (Erik Peinar, Chancellery of the Riigikogu) 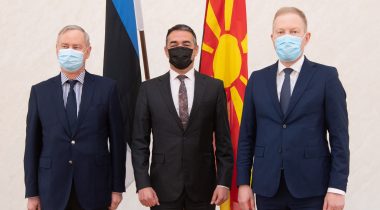