President of the Riigikogu (Parliament of Estonia) Eiki Nestor met with Vice President of the European Parliament Ulrike Lunacek. The future of Europe, and the impact of Brexit and the refugee crisis on it were spoken about at the meeting.

“Strong Europe is in the interests of all countries of Europe, and Europe is the strongest when the countries respect common values, cooperate closely and search for solutions to problems together,” Nestor said.

Lunacek and Nestor also discussed relations with Russia, integration of Russians into the Estonian society and implementation of the Registered Partnership Act.

Chairman of the European Union Affairs Committee Kalle Palling also had a meeting with Ulrike Lunacek. They spoke about the migration crisis, relations of the EU with Turkey and the trade agreement between the EU and the USA.

In Palling’s opinion, it is important to involve the public more into the decisions made at the EU level because that would help make such decisions more understandable to citizens. 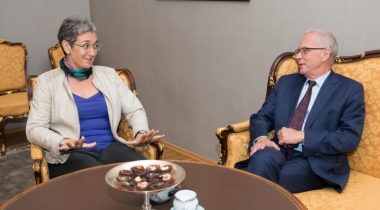