At today's sitting of the Finance Committee of the Riigikogu (Parliament of Estonia), all motions to amend the state budget that had been submitted by the factions of the parliament were reviewed.

“In addition to that, the Finance Committee supported the motion to amend the state budget submitted by the Government, according to which 5.6 million euro will be allocated for educational expenses. This budget amendment will contribute to the increasing of the salaries of teachers by about 6 percent next year,” Holsmer said. “Additional financing of research and development activities has been discussed during the budget debates in the Riigikogu. According to today’s decision of the Finance Committee, additional 4.4 million euro will be directed to the financing of research and development activities and the innovation programme next year,” the Chairman of the Finance Committee said.

The Finance Committee also made a consensus proposal to conclude the third reading of the state budget.

The third reading of and the final vote on the State Budget for 2016 Bill (103 SE) is scheduled for the plenary sitting of Wednesday, 9 December.

Photos of the sitting of the Finance Committee: 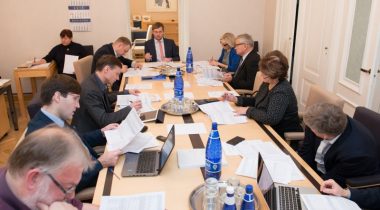