At the Interparliamentary Conference on Stability, Economic Coordination and Governance in the European Union (SECG), which started yesterday in Tallinn Creative Hub, the politicians of the member states of the European Union and the European Parliament continued their discussion on the budgetary policy of the EU, multiannual financial framework and efficient tax collection.

European Commissioner for Budget and Human Resources Günther H. Oettinger said that the budget of the EU was our common budget. He was optimistic about the 2018 budget negotiations, but thought it was much more complicated to reach an agreement on the multiannual financial framework.

Oettinger said that the withdrawal of the United Kingdom would result in around 15 billion euro gap in the EU budget. Besides that, the establishment of the budget has to overcome two important challenges: on the one hand, the differences in income, and on the other hand, the new areas that must be supported. He emphasised that the European Union was based on solidarity, and the differences in income between the states could be levelled through the investments made from the Cohesion Fund. Such investments will create added value for the citizens of Europe. As an example, he mentioned the cross-border projects, which could be used to increase the attractiveness of the region.

Member of the Committee on Budgets of the European Parliament Isabelle Thomas emphasised the transparence and balance of the budget in her report. According to her, the revenues of the EU budget depend on all member states, but additional possibilities of financing should also be looked for.

Deputy Secretary General of Tax and Customs Policy at the Ministry of Finance of Estonia Dmitri Jegorov spoke about collecting taxes efficiently. He pointed out that in Estonia, 40 cents were spent to collect 100 euro of taxes, but in some other member states several times more money was required for that. Using of new technologies and making the work of tax authorities more effective contribute to efficient tax collection.

Director for Indirect Taxation and Tax Administration of the Directorate-General for Taxation and Customs Union Maria Teresa Fábregas said that the challenges faced by tax administrators could be solved if the member states and the EU joined their forces. 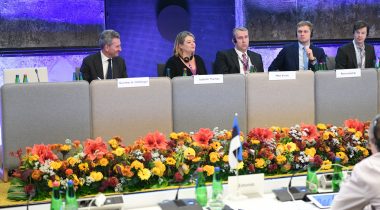