Today, Chairman of the Foreign Affairs Committee of the Riigikogu (Parliament of Estonia) Marko Mihkelson met with Minister for Foreign Affairs of Malta Evarist Bartolo. They discussed the security situation in Europe and Russia’s attempts to disrupt the current security architecture through hybrid activities.

According to Mihkelson, Estonia and Malta, as small countries, have excellent relations and common values to uphold in the European Union.

“Authoritarian regimes have put democracy and human rights under strong pressure,” Mihkelson said. “We have to stand for these values in a situation where Russia’s ambition is to expand its reach, and all means can be used for that in order to try to disrupt the current security architecture in Europe.”

Mihkelson recalled that Russia’s aggressive activities in Europe were nothing new, they started already around 30 years ago with the Chechen war and had continued in Georgia, Ukraine and Belarus, as well as in the Middle East and Africa, where the mercenaries of Russia’s Wagner Group fought.

The Minister of Foreign Affairs of Malta said that it was important that the southern Member States of the European Union understood what was happening on the Eastern border, and vice versa. Therefore, the communication and exchange of experience between the Member States is vital.

Relations with China and increase of China’s influence in the world were also discussed at the meeting. Transatlantic relations were spoken of as well, and information about the security policy situation in both regions was shared.

Photos of the meeting (Erik Peinar, Chancellery of the Riigikogu) 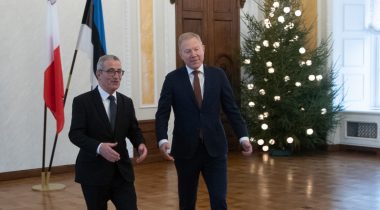