“It is natural that we want stability and growth of welfare in Europe. Therefore, it is important that Moldova, too, would do well in a long-term perspective. The Eastern Partnership Summit will take place in December and we regard our visit as a preparation for this meeting,” Mihkelson said.

“We support Moldova in continuing its journey of European integration, developing the rule of law, fight against corruption, and keeping the course of reforms. During the visit, I and my Baltic colleagues hope to get a survey of how we could help Moldova in this,” Chairman of the Foreign Affairs Committee noted. “We will also discuss possibilities for cooperation, the latest internal policy developments in Moldova and the energy crisis,” he added.

Today, the Chairs of Foreign Affairs Committees will meet with Speaker of the Parliament of Moldova Igor Grosu and Deputy Speaker of the Parliament of Moldova Mihail Popșoi, as well as with the Chair of the Committee on Foreign Affairs and European Integration Doina Gherman, and Lilian Carp, Chair of the Committee on National Security, Defence and Public Order and members of the Committee. Meetings with the representatives of the parliamentary friendship groups of the three countries are also planned.

At 11.35, the Chairs of Foreign Affairs Committees will give a press conference at the parliament building.

Tomorrow, the Chairs of Foreign Affairs Committees of the Baltic States will meet with President of the Republic of Moldova Maia Sandu as well as with the representatives of the European Business Association and the NGOs.

On Friday, the programme of the visit will continue with meetings with Prime Minister of Moldova Natalia Gavrilița and the representatives of international financial institutions. 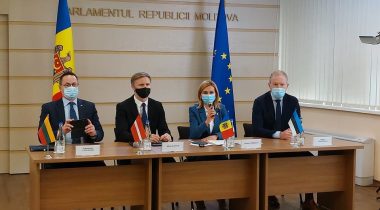