In a joint nomination, the Chairs of the Foreign Affairs Committees of the respective Parliaments of Lithuania, Latvia and Estonia have nominated the journalism collective Bellingcat for Pulitzer Prize in Journalism in investigative reporting.

Chairman of the Foreign Affairs Committee of the Riigikogu (Parliament) of the Republic of Estonia Marko Mihkelson added: “In the current atmosphere of ever spreading disinformation campaigns and attacks against established news media, having a fact based, transparent and thoroughly investigative journalism, that looks for truth wherever it may be found is more important than ever. Bellingcat harnesses the best qualities of people working together for one commendable goal. Their knowledge of using digital technology for open source investigation has already made significant impact on the international relations. I hope that they keep bringing to light the murky doings of darker powers that wish to sow discord and distrust.”

Chairman of the Foreign Affairs Committee of the Saeima (Parliament) of the Republic of Latvia Rihards Kols said: “Bellingcat has made contributions to uncovering some of the biggest issues in recent history, making international headlines when they uncovered  that Salisbury poisoning suspect Ruslan Boshirov is in fact Colonel Anatoliy Vladimirovich Chepiga, a highly decorated senior officer from Russian military intelligence who was awarded the state’s highest honour in late 2014. Bellingcat has been bringing the same single-minded dedication and commitment to all their investigations, and certainly will continue to do so. All Bellingcat findings have a certain quality in common – they seek to uncover the truth in the most controversial, most difficult places and subjects.”

As the nomination letter states, with regard to this award, Bellingcat has contributed to the emergence of a new type of journalism. It is a platform to bring together critically acclaimed and emerging citizen investigative journalists using open source information to investigate, collaborate and report worldwide issues that are being underreported and ignored. Furthermore, although most investigative journalism is shrouded in mystery, the platform shows their workings, detailing how they found out the story and which techniques they used. This is not only encouragement to the members of the public to get involved but also signifies a new level of transparency in the reporting on critical issues.

In the opinion of Chairman of the Committee on Foreign Affairs of Seimas (Parliament) of the Republic of Lithuania Juozas Bernatonis: “In the age of hybrid threats we need a hybrid response, and the Bellingcat team has all the capabilities to develop it. Through their activities and investigative journalism, they actively contribute to the protection of our democratic system from disinformation, fake news, which are being spread seeking to increase fragmentation of societies, hostility and distrust of democracy. Today, we are talking a lot about “fake news”, “troll factories”, and looking to the future, we need to think about the challenges that will arise with the development of artificial intelligence, rapid advances of new technologies. Seeking to increase our resilience, there is a clear need for initiatives, driven by the active members of civil society, and Bellingcat serves as a perfect example.”

As the nomination letter states, as an organization, Bellingcat is responsible for working on, and responsible for breaking, some of the biggest news stories worldwide. The contributions to uncovering the truth made by Bellingcat are unparalleled. They have a proven track record of excellence in investigative journalism. Recognizing the contributions to the creation of this new type of journalism and their investigative work would be long overdue.

Bellingcat is a website founded by the British journalist and former blogger Eliot Higgins, where the findings of journalist investigations into war zones, human rights abuses and the criminal underworld are published. It received international attention with its articles on the Syrian Civil War, War in Donbass and the downing of the Malaysian passenger flight in Ukraine. 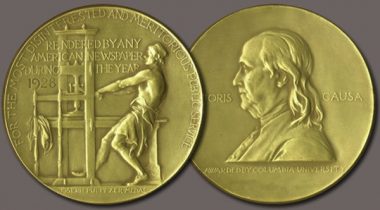