Cross-border movement and its organisation, visa issues, transfer of registered immovables in connection with the construction of the state border, preservation of traditional culture and giving education in border areas were discussed at the meeting of the Foreign Affairs Committee of the Riigikogu (Parliament of Estonia) with the representatives of the Union of Setomaa Rural Municipalities today.

Senior Head of the Council of Elders of the Seto Congress Aarne Leima said that Setos are asking for help in the field the state is able to help them, or in contributing to the comprehensive development of the region.

Chairman of the Board of the Union of Setomaa Rural Municipalities Margus Timmo said that the Setos have mapped the activities that support living in border areas. In the opinion of the Union, preservation of schools, settling and staying of young people in the region and establishing of infrastructure are the issues that need support in the border areas.

Misso Rural Municipality Mayor Lembit Sikk expressed hope that when the Estonian-Russian state border is laid down, then the ongoing programmes, like Setomaa Culture Programme and Setomaa Development Programme, would not lose the support of the state.

The Setos think that, from the point of view of national security, it is important that the rural border areas have active people and strong citizens’ associations. In their opinion, it is important to strengthen the work of the Estonian Defence League, assistant police officers and volunteer rescuers in local governments near the border. They also appreciate the construction of the border and the smooth operation of the waiting area of Koidula and Luhamaa border crossing points.

The problems related to the border that arise from the religious and family ties of the people of the region also need to be dealt with. They could be solved by the continuing and expanding of simplified procedures for issuing of visas, and opening of border crossing points for pedestrians and small cars.

The meeting was held within the framework of the proceedings of the bill on the ratification of Estonian-Russian border treaties. It was attended by Chairman of the Foreign Affairs Committee Sven Mikser, Deputy Chairman Enn Eesmaa and members of the Foreign Affairs Committee Juhan Parts, Henn Põlluaas and Andres Herkel, Chairman of the Board of the Union of Setomaa Rural Municipalities Margus Timmo, member of the Board of the Union Aare Hõrn and its Secretary Kaja Tullus, Mikitamäe Rural Municipality Mayor Aare Poolak and Misso Rural Municipality Mayor Lembit Sikk. 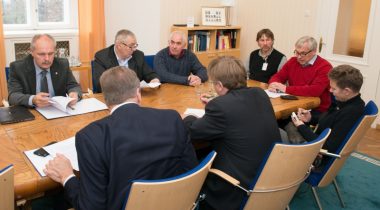