Today, the Foreign Affairs Committee received an overview of the Estonian honorary consul network and the planned changes, which is part of the hearings initiated by the Committee to strengthen Estonia’s foreign service.

“Estonia has close to 200 honorary consuls around the world, which is quite an impressive number,” said the Chairman of the Committee Marko Mihkelson. “Members of the Committee have had the opportunity to meet a number of honorary consuls during their foreign missions. We have met people with very different abilities and strengths who have widely differing attitudes towards their duties.”

“Honorary consuls should be engaged mostly in establishing economic contacts in addition to helping Estonian citizens in consular matters,” Mihkelson said. “While it is easy to quantify the issuing of passports or consular cases, we have now come to view honorary consuls as an untapped resource in developing economic cooperation.”

Mihkelson explained that the Committee had given a lot of attention this year to the functioning and strengthening of the foreign service network. “Today, we are seeing how fragmented and unfocused the shaping of our foreign economic policy is. We must find opportunities to improve cooperation between separate authorities, and bring foreign economic policy under one leadership,” Mihkelson said.

Member of the Committee Henn Põlluaas said that the objective cannot be a simple mechanical increase of the number of honorary consuls; instead, they must play a specific role in representing Estonia in diplomacy, economy, and other fields.

“We must use their potential and abilities wisely to ensure the best possible results for Estonia, which would also give us the best visibility everywhere. Keeping this in mind, it is also crucial to enhance their alignment and coordinated cooperation with the Ministry of Foreign Affairs,” Põlluaas explained.

The Committee had asked for an overview of how well the honorary consuls are kept informed, and how do they take part in the Estonian foreign service. Director General of the Consular Department of the Ministry of Foreign Affairs Kersti Eesmaa, and Desk Officer of the Consular Assistance Office Katrin Moon-Farouk explained that the Ministry of Foreign Affairs was currently reviewing the duties of honorary consuls, and that more attention would be given in the future to foreign economy and developing foreign trade, next to the consular assistance. 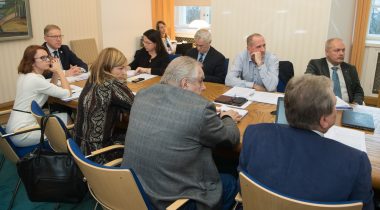