The Committee approved with 7 votes in favour and 3 votes against the amended text of the draft statement, and sent it for debate to the additional plenary sitting on Monday, 26 November.

In the opinion of member of the Committee Oudekki Loone, it is a moment of historical importance when the Riigikogu actively discusses serious foreign policy issues. “We spoke about the concerns and problems that have been under public attention in connection with the Compact for Migration in recent weeks,” Loone said. “It is a good practice, and these debates enable to show that we follow the discussions in the society.” She expressed hope that in the future, too, the Riigikogu would be active in shaping the foreign policy of Estonia.

The Committee also supported the motion of the Reform Party faction to formulate unambiguously in the Statement that joining the Global Compact for Migration is decided by the Government. The Free Party Faction submitted a similar motion, and the Committee essentially supported it.

On the motion of the Social Democratic Party Faction, the Committee added a reference to the provision of the Foreign Relations Act that regulates the competence of the Government to present statements, declarations and communications concerning foreign relations or accede thereto to the Draft Statement.

Chancellor of Justice Ülle Madise gave the Foreign Affairs Committee an overview of the independent legal assessment of the Compact. She pointed out five aspects, and assured that the UN Compact was not an international agreement, and was not legally binding for the states.

Minister of Foreign Affairs Sven Mikser agreed with the assessment of the Chancellor of Justice that the Global Compact was not a legally binding document.

The Draft Statement was introduced to the Foreign Affairs Committee by member of the Committee Barbi Pilvre as representative of the initiators. 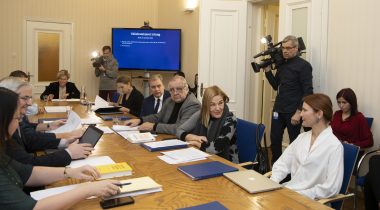