Today at 2–4 p.m., the Foreign Affairs Committee is holding a meeting in the Conference Hall of the Riigikogu to discuss the current state and the future of Estonia’s business diplomacy and foreign trade policy.

The participants include the Minister of Entrepreneurship and Information Technology Urve Palo, the Minister of Foreign Affairs Sven Mikser, and representatives of major business organisations.

The Chairman of the Foreign Affairs Committee Marko Mihkelson said that the meeting would summarise all the hearings and debates concerning Estonian business diplomacy and foreign trade that have taken place in the Committee over a year.

“Sadly, foreign trade has remained fragmented for a long time, and it is high time that we did something to repair it,” Mihkelson said. “International experiences show that foreign trade policy should be under the authority of the Ministry of Foreign Affairs. Estonia could have a Minister of Foreign Trade and Development Cooperation in addition to the Minister of Foreign Affairs. This would promote a clearer and more consistent political leadership in foreign trade, keeping more than 300,000 jobs in Estonia.”

Mihkelson highlighted the drastic decrease of Estonia’s foreign investments, and the fact that the objectives set in the growth strategy for increasing the export value chain are steadily falling behind the EU average. “Two major indicators show that we are underperforming,” he said.

“Estonia’s edge is our open economy,” said Mihkelson, adding that Estonia has trade relations with over 170 countries around the world. “Our foreign trade turnover forms 150 per cent of our GDP, which shows how dependent we are of foreign trade,” Mihkelson said. “And yet we only have seven specialised economic diplomats. Although, having said that, we do also have representatives of Enterprise Estonia working abroad, largely financed from EU funds. We must seriously think about how to go forward from here.” 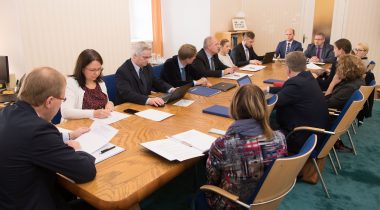