The delegation of the Foreign Affairs Committee of the Riigikogu (Parliament of Estonia) is on a visit to Belfast and London. The visit will last until Friday. At the meetings, the problems relating to Brexit and implementation of the Northern Ireland Protocol as well as their possible solutions, and the issues of bilateral relations will be discussed. The members of the Foreign Affairs Committee will also examine the situation in the customs offices on the border of Northern Ireland.

“The United Kingdom is a key ally and partner for Estonia, and they have made a significant contribution to ensuring our security,” Chairman of the Foreign Affairs Committee Marko Mihkelson said. “Now, when Great Britain is no longer a member of the European Union, it is especially important to continue the earlier excellent cooperation and find ways for strengthening it. Let it be even closer partnership in business diplomacy, e-residency, cybersecurity, green issues or in other fields,” he added.

The Chairman of the Foreign Affairs Committee explained that the aim of the visit was to strengthen the cooperation between the parliaments of the two countries, and the colleagues from the UK were expected to visit Estonia soon.

On Wednesday, the visit will continue in London with meetings with Deputy Speaker of the House of Commons Nigel Evans, Chair of the Foreign Affairs Select Committee Tom Tugendhat, Chair of the Defence Select Committee Tobias Ellwood and members of the committees. It is also planned to meet with the representatives of the Scotland House in London and Ambassador of the European Union to the United Kingdom João Vale de Almeida.

On Thursday, the delegation of the Foreign Affairs Committee will meet with former Prime Minister Theresa May and representatives of think tanks. The visit will end with meeting with the Estonians living in London.

The delegation consists of Chairman of the Foreign Affairs committee Marko Mihkelson and members of the Committee Mailis Reps and Raivo Tamm. Vice-President of the Riigikogu Hanno Pevkur will join the delegation at meetings in London. 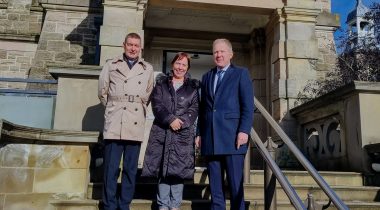