At its meeting today, the Foreign Affairs Committee continued its discussion on the situation in Belarus after the 9 August presidential elections, and supported the idea of drafting a statement of the Riigikogu in support of the democratic forces in Belarus.

The Chairman of the Foreign Affairs Committee Enn Eesmaa said that the idea to form a working group to draft the statement found support from all the political groups represented in the Committee. “We have been consistently working on issues surrounding Belarus in the Riigikogu. We hope to adopt a statement on the current developments at the plenary meeting as soon as possible,” he added.

The Deputy Chairman of the Committee Marko Mihkelson referred to a similar statement adopted by the Riigikogu in 2006, also in support of democracy in Belarus. “The situation in Belarus, in our immediate neighbourhood, affects Estonia’s security as well. Violence against the people and disregard for the organisation of fair and free elections is something than cannot be ignored, and this is what we intend to emphasise in the statement of the Riigikogu,” he said.

The Committee was also briefed on the activities of Estonia and the European Union in connection with the recent development in Belarus by the Director General of the Political Department of the Ministry of Foreign Affairs Lembit Uibo. Deputy Permanent Representative of Estonia to the United Nations Gert Auväärt briefed the Committee on Estonia’s activities in the UN Security Council. 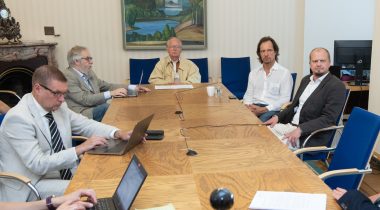