Chairman of the Foreign Affairs Committee of the Riigikogu (Parliament of Estonia) Marko Mihkelson said in the opening speech of the General Assembly of the Conference of Peripheral Maritime Regions (CPMR), which is taking place in Helsinki, that after having been in forced isolation for a long time during the last century, Estonia as a small country was aware of the importance of establishing new energy and transport connections and using the possibilities provided by digital technology.

Mihkelson said as the representative of the Presidency of the Council of the European Union that balanced development which was as innovative as possible, but at the same time made use of the multi-level potential of the Union, was in the interests of Estonia.

“By today, Estonia is politically one of the most integrated Western countries. At the same time, it is clear that the growth of our international competitiveness is possible only if our physical and digital connections create new possibilities for participating in the international trade,” Mihkelson added.

In Mihkelson’s opinion, one of the exciting future possibilities for Estonia is the north-south trade route. Already now, the climate change has brought along the possibility that the Arctic Ocean will become navigable, which in turn will be a basis for a totally new trade route between Europe and Asia.

“Therefore it does not sound utopian at all that, one day, a trade route to south could start from the Arctic Norwegian port of Kirkenes,” Mihkelson said. He added that Finland was already assessing the cost-effectiveness of a railway between Rovaniemi and Kirkenes, and the construction of a tunnel between Helsinki and Tallinn was being discussed more and more. “If we add to this the Rail Baltic, which is reaching the construction stage, then good preconditions have been created for the emergence of a new transport corridor that offers possibilities for Estonia,” he said.

The General Assembly of the Conference of Peripheral Maritime Regions (CPMR General Assembly) is held in Helsinki on 18–20 October. The reports of the Conference deal with adaptation to climate change, next steps in aviation, cohesion policy, integrated maritime policy, the Energy Union and the Clean Energy Package, the future of Europe and the priorities of the EU budget. 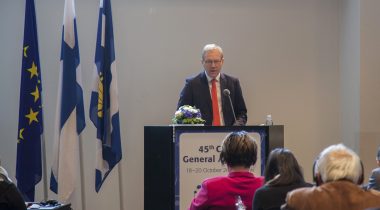