The Foreign Affairs Committee of the Riigikogu (Parliament of Estonia) was given an overview of the study on strengthening of the Estonian foreign service, conducted by the International Centre for Defence and Security. The study points out that the Estonian foreign policy needs clearer defining of long-term interests, and that besides security policy, greater attention should also be paid to foreign trade issues.

Chairman of the Foreign Affairs Committee Marko Mihkelson emphasised that the Estonian foreign policy had been based on consensus, and in that regard, Estonia has been successful as a small country. “At the same time, the world changes rapidly and this requires clearer formulation of the strategic objectives of foreign policy of Estonia,” Mihkelson said. “The study is an excellent input for the political debate initiated by the Foreign Affairs Committee with the purpose of strengthening the foreign service, and the international capability of Estonia more generally.”

Mihkelson also said that the Foreign Affairs Committee planned to continue with additional hearings and, taking into account the study that had been presented today, make its proposals.

Member of the Committee Barbi Pilvre underlined the importance of the Riigikogu in discussing foreign policy issues. The study also points out that in order to formulate the foreign policy interests and long-term objectives of Estonia, it is necessary to start a broad-based discussion that involves all political parties represented in the Riigikogu, relevant ministries and institutions, the President of the Republic, think tanks, academic organisations and private sector. The study also notes that the political parties in the Riigikogu should agree upon stable financing of the long-term budgetary needs of foreign service.

Research Fellow of the International Centre for Defence and Security Kalev Stoicescu presented the study to the Foreign Affairs Committee. The study focuses on the conformity of foreign service with implementation of the objectives of the Estonian foreign policy, and on strengthening of the foreign service. The study is available on the Riigikogu web page. 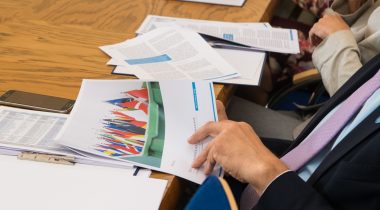