The delegation of the Foreign Affairs Committee of the Riigikogu (Parliament of Estonia) is visiting New York until Tuesday to get an overview of Estonia’s activities as an elected member of the UN Security Council.

The delegation includes Chairman of the Foreign Affairs Committee Marko Mihkelson and members of the Committee Indrek Saar, Maria Jufereva-Skuratovski and Raivo Tamm.

In Mihkelson’s opinion, the Estonian diplomats, headed by Permanent Representative of Estonia to the United Nations Sven Jürgenson, have convincingly proved that even a small country can be both visible and credible in the UN Security Council. “The rich experience gained during the two years will undoubtedly be useful in ensuring Estonia’s security within the framework of the United Nations and other international organisations,” Mihkelson said.

Tomorrow, the delegation of the Foreign Affairs Committee will meet with President of the United Nations General Assembly Abdulla Shahid and the Executive Director of Security Council Report. They will also observe the Arria-formula meeting on Syria, which will be held in the UN Security Council and chaired by Estonia.

Meetings with Assistant Secretary-General in the UN Department of Political Affairs Miroslav Jenča and United Nations Under-Secretary-General for Peace Operations Jean-Pierre Lacroix are planned for Tuesday. The Estonian delegation will also watch the Security Council’s meeting on Middle East.

On Wednesday, the visit of the Foreign Affairs Committee delegation will continue in Washington, D.C.

Photos of the meetings 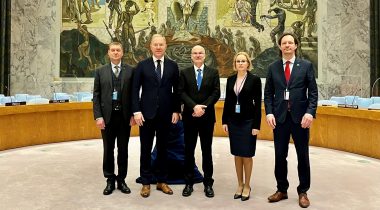