The delegation of the Foreign Affairs Committee of the Riigikogu (Parliament of Estonia) is on a visit to Washington, D.C., where the meetings will focus on strengthening allied relations and security cooperation. The visit will last until Saturday.

The delegation includes Chairman of the Foreign Affairs Committee Marko Mihkelson and members of the Committee Indrek Saar, Maria Jufereva-Skuratovski and Raivo Tamm.

“The United States are Estonia’s most important ally, whose contribution to ensuring the security of the Baltic region and to deterrence measures is priceless,” Chairman of the Foreign Affairs Committee said. “The Baltic Security Initiative budget package, which was approved in the Congress last year, has a significant role for Estonia. In the context of the latest security developments, the hybrid attack launched by Belarus and the events in the border regions of Ukraine, continuing of the Initiative at least to the same extent and enhancing of deterrence capacity are without doubt of key importance to our security,” Mihkelson added.

Today, the Estonian delegation has scheduled meetings with Chair Jeanne Shaheen and Ranking Member Ron Johnson of the Senate Foreign Relations Subcommittee on Europe and Regional Security Cooperation, with Chair of the U.S. Helsinki Commission Ben Cardin and member of the Senate Committee on Armed Services Kevin Cramer. They will also meet with co-chair of the European Union Caucus Representative Joe Wilson and representatives of the US Department of State.

Tomorrow, the delegation of the Foreign Affairs Committee of the Riigikogu will meet with Chair of the Senate Foreign Relations Committee Bob Menendez, as well as with Chair Bill Keating and Ranking Member Brian Fitzpatrick of the House Foreign Affairs Subcommittee on Europe, Energy, the Environment and Cyber. They will also have meetings with leaders of the House of Representatives Baltic Caucus Ruben Gallego and Don Bacon, co-chair of the European Union Caucus Brendan Boyle and member of the Committee on Armed Services Liz Cheney. The delegation will also meet with the representatives of the US Department of State dealing with European and Eurasian affairs and Russian issues.

On Friday, the delegation of the Foreign Affairs Committee will participate in a round table on the developments of the US foreign policy at the Heritage Foundation and meet with the representatives of European and NATO policies of the US Department of Defense. The visit will end with a meeting with the Estonian experts working in Washington.

Photos of the meetings 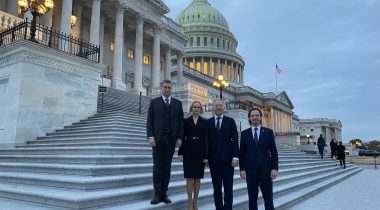