The Minister of Health and Labour Jevgeni Ossinovski replied to the interpellation concerning investments in health centres and noted that, together with European Union funds and co-financing by applicants, circa 115 million euro will be invested in primary medical care.

“On the one hand, we will indeed invest funds in the infrastructure of primary health care service providers or, figuratively speaking, we will update family health centres,” Ossinovski said. “However, on the other hand, this is not just reconstruction of buildings but a larger health care policy amendment which will give family physicians’ teams more force and a greater role.”

The Minister said that, for example, the rights of family nurses in family physicians’ teams will be extended, and the aim of the amendments is to ensure a better and higher-quality primary health service. On the one hand, this will increase the availability of medical care and, on the other hand, will reduce pressure on medical care which will reduce waiting lists in hospitals.

“It is planned to invest a total of 85 million euro from European Union funds in the updating of the health care infrastructure and, together with co-financing by applicants, a total of circa 115 million euro will be invested in the primary level until 2020+,“ he added.

The Minister of the Interior Hanno Pevkur replied to the interpellations concerning the commitments taken by the Government in the resolution of the migrant crisis (No. 77), the capability of the police (No. 85), and the investigation of the fire at Vao Accommodation Centre for Asylum Seekers, and harassment of activists opposing mass immigration (No. 88).

The Riigikogu began the sitting with a moment of silence in remembrance of the people who died by the hand of terrorists in Paris.

The sitting of the Riigikogu ended at 8.01 p.m. 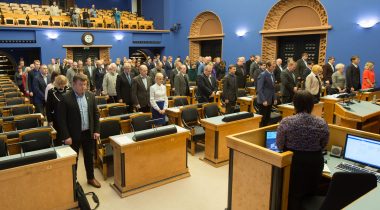