Chairman of the National Defence Committee of the Riigikogu (Parliament of Estonia) and member of the Estonian delegation to the NATO Parliamentary Assembly (NATO PA) Hannes Hanso participated in the four-day visit of the Science and Technology Committee of the NATO PA to Abu Dhabi, where the security and political situation of the Gulf States, the possibilities for cooperation between the United Arab Emirates (UAE) and NATO, cyber security and renewable energy technologies were discussed.

Hanso, who was elected the Chairman of the NATO PA’s Sub-Committee on Technology Trends and Security in October 2017, thinks that the visit was an excellent opportunity to learn about the situation in the Persian Gulf region.

“The UAE is NATO’s closest partner in the region, their security cooperation is very extensive,” Hanso said. “The stability or instability of the Gulf region has a great geopolitical significance. In the context of the ongoing demonstrations in Iran, the reform programmes of Saudi Arabia and the activities of Russia, it is very important to pay attention to this region.”

In the opinion of Hanso, who chaired the meetings in Abu Dhabi, the attitude there is that the role of the USA in the region is changing and wider contribution has to be made to addressing security issues.

“The technological solutions used in the UAE prove the importance of modern technologies in national defence, among other things, in ensuring energy security and cyber security, and certainly in the fight against terrorism,” Hanso said. “It was good to see that the handbook on cyber defence Tallinn Manual, and the activities of Estonia in the cyber sector are also well-known among the experts here.”

More than 30 parliamentarians from 15 NATO member states took part in the visit of the NATO PA Science and Technology Committee in Abu Dhabi. They had discussions with the Speaker and the members of the Federal National Council of the United Arab Emirates, the ambassadors of the United Kingdom, France, Germany and Denmark residing in Abu Dhabi, and the officers of the air forces of the USA, France and UAE. The parliamentarians also visited the high technology renewable energy plant in Masdar City. 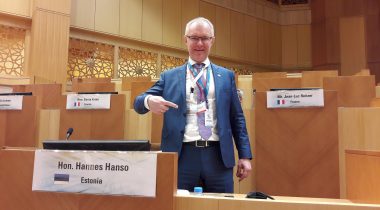