The meeting of the Chairman of the National Defence Committee of the Riigikogu (the Parliament of Estonia) Marko Mihkelson and the Vice-Minister of Defence of Japan Akira Sato focused on security issues.

In the opinion of the Chairman of the National Defence Committee Marko Mihkelson, it is remarkable how much the two countries have in common.

“We both sense that the security situation is changing not only in Europe, but in the whole world,” Mihkelson said. “The security challenges of Japan are to a great extent similar to the challenges faced by us and our allies in Europe. Therefore the exchange of information and increasing cooperation in the field of security and cyber defence are extremely important.”

Mihkelson acknowledged the good parliamentary cooperation of Estonia and Japan, and hoped that it will become even closer during the term of office of this Riigikogu.

The Vice-Minister of Defence of Japan Akira Sato said at the meeting that Japan feels it has a connection with Estonia because we have a common neighbour. The territorial dispute between Japan and Russia over the South Kuril Islands (for Japan, the Northern Territories) is still unsolved.

Sato remarked that Russia’s military attention both towards Japan and Estonia has intensified. Recently Russia conducted a military exercise on the disputed islands. Russia has conducted military exercises also in the regions bordering on Estonia.

The economic sanctions against Russia, which Japan has joined, were also discussed at the meeting. 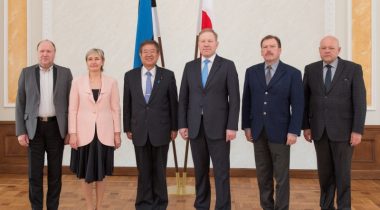