Chairman of the National Defence Committee of the Riigikogu (Parliament of Estonia) Marko Mihkelson met with the Parliamentary Commissioner and Ombudsman for the Armed Forces of Germany Dr Hans-Peter Bartels, who is on a visit to Tallinn, and the Ambassador of Germany in Estonia H.E. Christoph Eichhorn.

Mihkelson emphasised at the meeting that, as allies, Estonia and Germany have two great security challenges – how to deal with the revisionist Russia, and how to get to the roots of the problems that have caused the refugee crisis in Europe.

Mihkelson said that it is important to understand that Russia’s aggressive behaviour is not only aimed at breaking up the territorial integrity of Ukraine, it also gives the feeling of the Cold War period attitude towards the countries of the West. At the meeting he also spoke of the kidnapping of the Estonian security police officer Eston Kohver by Russia.

“We very much hope that besides the United States, our European allies would also contribute through the presence of rotating infantry units in Estonia and in the other Baltic States,” Mihkelson said at the meeting. 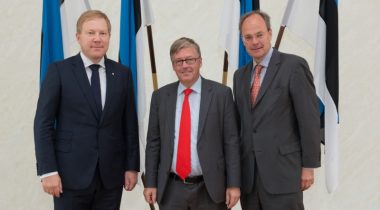