Chairman of the Estonian delegation to the NATO Parliamentary Assembly Marko Mihkelson and member of the delegation Hannes Hanso participate in the Parliamentary Transatlantic Forum of the NATO PA in Washington, where the positions of the United States regarding the main challenges of NATO will be spoken about.

In Mihkelson’s opinion, the meeting in Washington is important because it enables to map the current situation and plan further activities together with the allies. “The world is undergoing great changes, and it is important for us to be able to adapt to it and perceive with the allies how we can protect our world in the best way,” Mihkelson said.

Member of the Estonian delegation Hannes Hanso said that the level of defence spending of the allies, or the commitment of the countries to contribute at least 2 percent of their GDP to their defence budgets, would also be discussed at the Forum. Although Estonia meets that requirement, Hanso thinks that the level of defence spending should be increased, and 2.5 percent should be the target.

“If we want to develop armoured manoeuvre capability or medium-range air defence, we have to admit to ourselves that a country with the size of Estonia most probably would not be able to do that within two percent,” Hanso said. “I think that the base level of defence spending should be increased. Today we compensate the lack of these capabilities with the presence of the allies.”

Hanso said that another topic that would be discussed was the rapidly changing situation in the Middle East and on the Korean Peninsula. “It would be naive to think that these events do not concern our security. We have to keep the topics of our region constantly in the focus of the attention of our allies,” Hanso added.

The United States’ defence strategy and priorities in the changing world will be the topic of the opening panel of the Forum, which will be held from Monday to Wednesday. Afterwards, the challenges of the Middle East will be discussed. During the next days, the relations between the USA and China, and the foreign policy and domestic economy issues of Russia, as well as trade and environment protection will be spoken about in Washington. 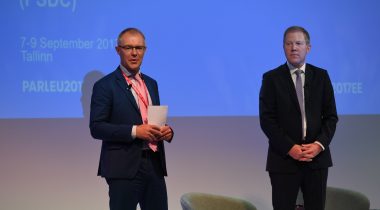