At its sitting today, the National Defence Committee of the Riigikogu (Parliament of Estonia) was given an overview of the maritime security study that maps the capability gaps of Estonia's maritime security and offers possible solutions for filling them.

Chairman of the National Defence Committee Marko Mihkelson expressed his delight at the completed study that was thorough and prepared the ground for proceeding with solutions. He added that the Committee would make preliminary proposals for improving maritime security next week.

“Keeping in mind what is going on around us, it is not possible for us to live in a comfort zone, where we postpone making of decisions,” Mihkelson said. He added that developing of national defence had reached the level where, instead of dreaming, we deal with real capability development that is backed with resources.

Mihkelson noted that it was not necessary to have large resources for filling primary maritime security gaps. It is necessary to have good cooperation between the agencies. In Mihkelson’s opinion, modernisation of maritime monitoring to meet the requirements of security should be one of the first steps.

Member of the National Defence Committee Johannes Kert emphasised the importance of the inter-agency integrated maritime conception, which should correspond to NATO standards.

Member of the National Defence Committee Madis Milling said that Finland, where maritime security is ensured in transministerial cooperation, should be used as an example.

The summary of the study, which was prepared in the Centre for Applied Studies of the Estonian National Defence College, will be published by the end of this year.

Representatives of the Government Office, Ministry of Defence, Ministry of the Interior, Maritime Administration and the Defence Forces also attended today’s sitting of the National Defence Committee. 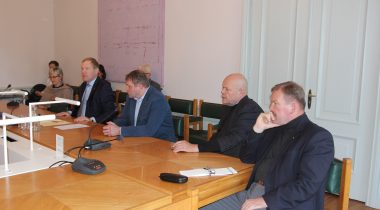