Today and tomorrow, the National Defence Committee is in Bergen, Norway, at the annual security forum of the defence committees of Baltic, Nordic, and Polish parliaments. The focus of the discussions is on NATO-Nordic cooperation, and Nordic-Baltic security framework.

The Chairman of the National Defence Committee Hannes Hanso has no doubts about the value of the Nordic-Baltic defence cooperation. “Regardless of whether a country is a member of the NATO or not, we need to cooperate because we all value the security of our region,” Hanso said. “We have a similar view of the threats, so there should be no artificial obstacles to joint activities.” He added that another crucial task today was to raise awareness about our situation, including by means of intelligence cooperation between the countries of the region.

As the host nation, Norway is introducing its guests to the gender neutral conscription service. Hanso believes that other countries have a lot to learn from the experiences of Norway, because including women into conscription is a current issue in the other countries of the Baltic Sea region as well, including most certainly in Estonia.

The Norwegian Minister of Defence Ine Eriksen Søreide will address the forum, speaking about Norwegian defence policy and the priorities of the national security policy. The panel on Russia will focus on how to understand and interpret Russia’s ambitions and military capabilities.

The guests will visit Haakonsvern navy base, where the special operations force of the Royal Norwegian Navy will demonstrate their capabilities.

The Chairman of the Estonian National Defence Committee will talk about the parliamentary dimension programme of the Estonian Presidency of the EU, and about the Conference for the Common Foreign and Security Policy and the Common Security and Defence Policy (CFSP/CSDP) which will be held in Tallinn in September.

The delegation of the National Defence Committee also includes members of the Committee Ants Laaneots, Madis Milling, and Tiit Terik. 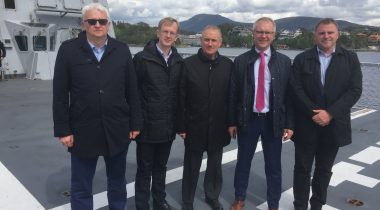