Riigikogu passed the Act on the Denunciation of the Agreement on the Baltic Common Transit Procedure between the Government of the Republic of Estonia, the Government of the Republic of Latvia and the Government of the Republic of Lithuania (834 SE), initiated by the Government, was passed with 49 votes in favour. BALTRON is a joint mine clearance unit of the Baltic states which includes vessels of the Estonian, Latvian and Lithuanian navies. The main aim of the establishment of BALTRON was to increase the capability of the navies of the Baltic states to cooperate with NATO at the time when Estonia, Latvia and Lithuania were in the NATO programme “Partnership for Peace”, and to demonstrate political unity in becoming NATO members. The targets set for the project upon the establishment of BALTRON have been met and the further cooperation of the navies of the Baltic states may become more diversified and flexible. One part of the achievement of that is also the denunciation of the international agreement concerning BALTRON. 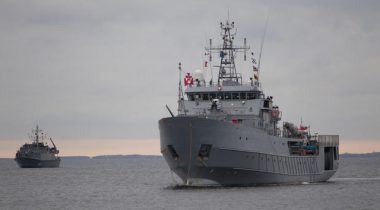