At the meeting of the President of the Riigikogu Eiki Nestor and the President of Latvia Raimonds Vējonis at Toompea, relations between the two countries and tense international situation were discussed.

It was noted at the meeting that in addition to ensuring of security and the problems connected with the crisis in Ukraine, the issue of refugees in Europe has also arisen in the focus of attention. It has fed passions in both countries, as have the concerns connected with Greece. “We are in solidarity in solving the refugee problems in Europe. The contribution of our allies to the security of the three Baltic States has been effective. And we can also be responsible partners,” Nestor said. The President of Latvia had the same opinion.

During the discussion of the issues connected with the crisis in Ukraine, Russia’s tactics of hybrid war and the total propaganda war based on lies that the aggressor uses on the whole front were highlighted. Nestor and Vējonis considered it necessary to be on guard also in regard to the evidences of hybrid war targeted against the Baltic States. It was agreed that this requires alertness and counter-measures, and also increasing of defence capability. Regarding the solving of the problems of Ukraine, Nestor and Vējonis were of the opinion that in addition to giving international assistance, it is also important to ensure the implementation of reforms that would help Ukraine to achieve economic growth again.

At the meeting Nestor expressed his delight that the President of Latvia, who had been inaugurated only the day before, made his first foreign visit namely to Estonia.

The Chairperson of the Estonia-Latvia Parliamentary Group Mailis Reps also took part in the meeting.

Photos of the meeting: https://fotoalbum.riigikogu.ee/v/Riigikogu+juhatus/XIII+Riigikogu/Riigikogu+esimees+Eiki+Nestor/09072015/ 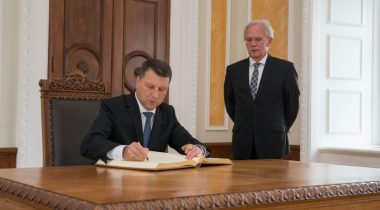