President of the Riigikogu (Parliament of Estonia) Eiki Nestor and Prime Minister of Luxemburg Xavier Bettel discussed the relations between the two countries, and the issues influencing the security and unity of Europe at their meeting in the Riigikogu.

“The conflict in Ukraine influences the security of Estonia and the whole Europe. Ukraine must get a possibility to restore control over its territory, and the sanctions against Russia cannot be removed or eased as long as the Kremlin does not fulfil the Minsk agreements,” Nestor said. “The countries of Europe have to act in unison in this respect.”

The President of the Riigikogu thanked the Prime Minister for the support Luxemburg had given in developing the cyber training field of Estonia, and also for supporting Estonia as a candidate for non-permanent membership of the UN Security Council in 2020–2021. Nestor also emphasised the importance of the cooperation between the two countries in digital issues.

Chairman of the Foreign Affairs Committee Marko Mihkelson also participated in the meeting. 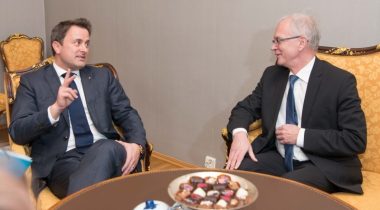