The meeting of President of the Riigikogu (Parliament of Estonia) Eiki Nestor and Minister of Foreign Affairs of Romania Teodor Meleșcanu, who is on a working visit in Estonia, focused on the Eastern Partnership and cooperation in the European Union.

The situation in Romania’s neighbouring country Moldova, and Estonia’s and Romania’s support to Moldova in striving towards the EU were spoken about in more detail. It was found that Moldova should continue with the reforms it has started, in order to meet the criteria set for accession. “Estonia is ready to support all Eastern Partnership countries, and to share its experience with reforms,” Nestor said.

Bilateral relations between Estonia and Romania, the situation in Ukraine, the role of the United Kingdom in Europe after Brexit, and the coming Estonian Presidency of the Council of European Union were also discussed at the meeting.

Chairman of the Foreign Affairs Committee Marko Mihkelson, who attended the meeting, pointed out the cooperation in NATO and the need to stand together for strengthening the security in the region.

Minister of Foreign Affairs Meleșcanu forwarded to the President of the Riigikogu the invitation to visit the Parliament of Romania.

Yesterday Minister Meleșcanu opened the Embassy of Romania in Tallinn. 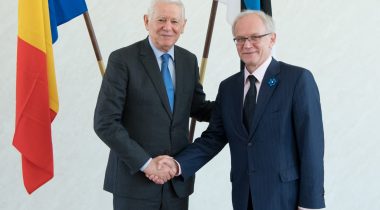