On 24 February at 7.34 a.m., everybody is invited to Toompea in Tallinn, where the flag raising ceremony on the Independence Day of the Republic of Estonia is held.

It is also the 30th anniversary of the day the blue-black-and-white flag was again hoisted on the Tall Hermann Tower and the tradition of the flag raising ceremony on 24 February began.

President of the Parliament of Estonia, the Riigikogu, Eiki Nestor will deliver a speech at the ceremony. After that, Archbishop of the Estonian Evangelical Lutheran Church Urmas Viilma will say the words of blessing. Actor of Tallinn City Theatre Kaspar Velberg will read out the Estonian Declaration of Independence.

President of the Republic of Estonia Kersti Kaljulaid, President Toomas Hendrik Ilves, President Arnold Rüütel, members of the Riigikogu and the Government, representatives of constitutional institutions and the diplomatic corps, and the Estonian Flag Society have been invited to the flag raising ceremony.

The flag raising ceremony in the Governor’s Garden at Toompea will be attended by the flag hoisting units of the Defence League, the Women’s Home Defence, the Young Eagles, the Home Daughters, the Scouts, the Guides, academic organisations, as well as societies, associations and schools.

Dear members of the press, you are most welcome to cover the event. 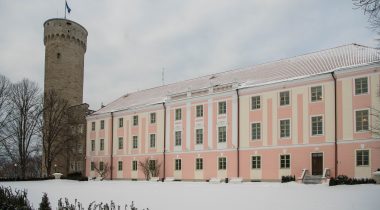