On the Day of Restoration of Independence, the August 20 Club held its traditional festive meeting in the White Hall of Toompea Castle, where the speeches focused on the change of generations.

In his welcome speech, President of the Riigikogu (Parliament of Estonia) Eiki Nestor wished the Club strength, success and enthusiasm. Nestor said that 26 years of independence had not been in vain. He recalled that when in the beginning of the 1990s, the main problem of the local governments had been that they had neither fuel nor money for heating apartment buildings in winter, then today they dealt with completely different issues.

Nestor also spoke of the change of generations, both in politics and in public life in a wider sense. “Yesterday, a younger person said it was good that Ivo Linna had participated in the Estonian Song competition, otherwise young people would not have recognised him at the Song Festival,” Nestor said. “A new generation is emerging, and they have their own heroes, who are as important to them as Ivo Linna was for us.”

Prime Minister Jüri Ratas thanked those 69 members of the Supreme Council who 26 years ago had had no fear for their personal fate, but dared to look further. “Our country and our people will never forget it,” Ratas said. “We will always be grateful for the courage they showed.” Ratas added that the new generations also had to understand that there were many important decisions that yet had to be made. “We make history every day and every hour, our deeds and our words have to be based on that knowledge,” Ratas said.

Member of the August 20 Club Tiit Made, who gave a speech celebrating the occasion, said that Estonia had become a nice country. “Our people have dived into the open world more than ever before. We have managed to make our nature much cleaner and more enjoyable than it was a quarter of a century ago. Our international position is considerably better,” Made emphasised. He added that belonging to the European Union had been very useful for Estonia, and NATO membership had helped to increase security.

In Made’s opinion it is hard to expect more rapid development than Estonia has had until now. He emphasised that economy was the basis for the existence of a country, and that economy had a long-term impact. “If the changes made by the rulers suit the economy, it will give profitable income and competition opportunities, if the decisions do not suit the economy, the revenge will be harsh,” Made said. “Therefore it is hard to say what the changing of the tax system, which had been in force since 1994, will result in.”

As a problem that needs to be solved, Made mentioned the stateless persons who had no right to participate in parliamentary elections, but who influenced the results of local elections.

The August 20 Club unites the people who were elected to the Supreme Council of the Republic of Estonia in 1990, and voted for the resolution of the restoration of the independence of Estonia 26 years ago. 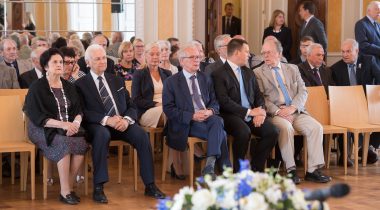