The 34th Session of the Baltic Assembly in Vilnius discussed the internal and external dimension of European security, cooperation between the Baltic States, development of joint transport and infrastructure projects in the region, cooperation in cyber defence, and joint procurements of medicinal products and medical devices. Implementation of the Partnership Agreement on Lending of Medicinal Products and Medical Devices Procurable Centrally, the progress of joint healthcare projects, and other issues related to the economic cooperation of the Baltic States were also spoken about.

Deputy Chairman of the Estonian Delegation to the BA Aadu Must considered the work of the Session constructive. “We admitted once again that the Baltic States have common values, aspirations and interests. All the debates reached the conclusion that we should commit ourselves more forcefully to finding joint solutions to the problems of the region. The aims we have set are achievable if we join the forces of the Baltic States,” Must said.

President of the Riigikogu Eiki Nestor, who spoke at the opening of the Session of the BA, said that mutual cooperation of the Baltic States needs less declarations and more specific activities for the implementation of projects.

Joint positions on the issues discussed at the Session were recorded in the Resolution of the 34th Session of the Baltic Assembly.

The Final Document sets out the priorities of the Baltic Assembly for the next year. One of these priorities is increasing the security of the region, including joint defence planning, strengthening of national borders, and good governance of migration and asylum policy.  It is also considered important to promote strategic cooperation, which means provision of quality, unbiased information within the region, protection of European values, and supporting independent media In economic cooperation, development of transport and energy infrastructure is emphasised. Active work on the implementation of the Rail Baltica project, strengthening energy security of the Baltic States, and integrating and connecting the Baltic energy markets and infrastructure to the EU internal market and infrastructure are in the focus here.

After the 34th Session of the BA, the presidency of the Baltic Assembly and the Baltic Council of Ministers will pass over to Latvia.

The Baltic Assembly is an international organisation that promotes cooperation between the Estonian, Latvian and Lithuanian parliaments. It was founded on 8 November 1991 in Tallinn. Next year the Assembly will celebrate its 25th anniversary.

Homepage of the Baltic Assembly: 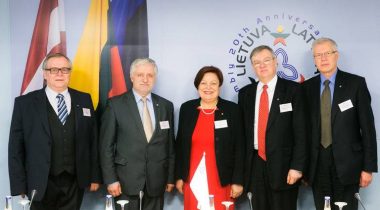