Head of the Estonian Delegation to the NATO Parliamentary Assembly (PA) Marko Mihkelson and members of the Delegation Hannes Hanso and Oudekki Loone participate in the NATO PA Annual Session in Halifax, Canada.

“In security issues, it is important for us that the allied cooperation between the NATO countries remains strong,” Head of the Delegation Marko Mihkelson said.

Mihkelson pointed out that the Defence and Security Committee’s report on reinforcing NATO’s deterrence in the East, which is on the agenda of the Annual Session, concerned Estonia the most directly. “We wish assurance that the battalion-size battle groups of NATO enhanced presence will remain in place for as long as needed, and the deterrence capability is strengthened when possible,” he added.

Mihkelson said that no NATO meeting passed without speaking of equal burden-sharing. “If we want the allies to contribute on NATO’s Eastern flank, we have to contribute also ourselves, and we are doing that,” he emphasised. “The level of Estonian defence spending exceeds the agreed-upon two percent of GDP, while other member countries are still on their way towards two percent.”

Member of the Estonian Delegation Oudekki Loone thinks that the general changing of the principles of operation of international relations affects the security situation directly. “It can be seen more and more that the structure which was established after World War II does not always suit for solving today’s problems,” Loone said. “Therefore, discussions on the future of the international trading system or the space industry, which requires inevitable cooperation, are on the agenda.”

Loone added that if Estonia wanted to determine its future itself, it was extremely important to participate in all discussions and consider different possibilities for the future.

The NATO PA Annual Session, which is held in Halifax from Friday to Monday, brings together parliamentarians from the 29 NATO member countries as well as delegates from partner countries and observers to discuss international security issues affecting the Alliance.

Saturday and Sunday are devoted to meetings where the resolutions and reports of NATO PA’s five Committees are discussed. At the Plenary Session on Monday, the new President of NATO PA will be elected.

The topics under discussion cover the defence technology, hybrid war, burden sharing, opportunities and challenges in the space, and the future of space industry. Besides that, energy security challenge in Central and Eastern Europe, and Russia’s meddling in elections and referenda are also spoken about.

NATO’s contribution to solving the problems on the unstable Southern flank and strengthening deterrence on the Eastern flank, and how terrorists use encrypted messaging will be discussed as well.

There will also be reports on the security of the West Balkan countries, the problems of regional security in Afghanistan, North Korea’s challenge to international security, NATO Special Operations Forces in the modern security environment, and security and cooperation in the High North. 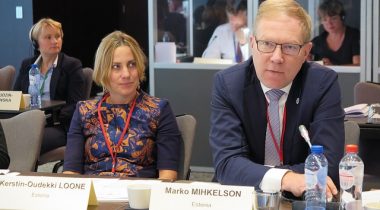